Aru Shah and the End of Time - Roshani Chokshi - Review 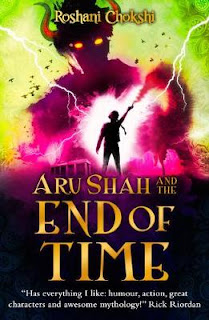 Twelve-year-old Aru Shah has a tendency to stretch the truth in order to fit in at school. Whilst her classmates are jetting off to exotic locales, she'll be at home, in the Museum of Ancient Indian Art and Culture where her mother works. Is it any wonder that Aru makes up stories about being royalty, travelling to Paris, and having a chauffeur? When Aru's schoolmates dare her to prove that the museum's Lamp of Bharata is cursed, she doesn't think there's any harm in lighting it. Little does Aru know that lighting the lamp has dire consequences. She unwittingly frees the Sleeper, an ancient demon whose duty it is to awaken the God of Destruction. Her classmates and beloved mother are frozen in time, and, accompanied by a wise-cracking pigeon and her long-lost half-sister, it's up to Aru to save them.

So let me start up by telling you that this was great – I went into this with high expectations and Aru 100% met them. This was one of my most anticipated reads this year, for a number of reasons, and let me tell you, this did not disappoint. It was everything I wanted it to be and more – but beyond being exactly wanted, I’m confident in saying that this book is something that anyone will enjoy and fall in love with, irrespective of their age.

I want to start off by talking about what this means to me, and why it’s so important in terms of representation. It’s not something I usually talk about, as actually, whilst I am a PoC, I don’t actually have any issues with current representations – but this book was a big beautiful bonus for me. Why may you ask? Brown. Hindu. Representation. And the reason this resonated with me, is because yes I’m now an adult, but this is the first time I’ve seen myself in a YA or MG books. For years, I’ve been seeing white people, black people, even Muslims represented – but Hindu’s or ‘Indians’ have proved scarce. So for me, this was the book I always wanted a child – a book that was relatable to me, that had my people, that explored the myths and stories I was told as a child.


Now let’s talk about the story. First up is word building, because honestly an MG fantasy novel is nothing without good world building, and Chokshi’s is bloody beautiful. It’s definitely on par with, actually maybe better than that of Riordan’s. She’s crafted this absolutely wonderfully fantastic world, filled with glorious Hindu mythology and magic, and littered with Indian Easter eggs, that Indians will be able to pick and go ‘ah, I know that.’ It’s an effortlessly beautiful world, in that is so easy to fall into and so easy to never want to leave, engulfed by wonderful creatures, crazy demons, and one girls quest to stop it all.

Which naturally brings me onto the mythology. For me it was a step back in time, to the days of my childhood and the stories I read as child – but for so many others this will be the first time they ever get to experience the glory, richness and magic of Hindu mythology and folklore – and Chokshi has done an expert job of weaving this into the story and the world she’s built. For years I’ve been wishing someone would take the expansive and limitless mythology of Hinduism and weave it into a novel, and Chokshi has given me exactly what I wanted. A world that now feels like home; a world I can’t wait to get back to.

As for the plot, it moves well. A very good pacing, especially for the audience. It’s fast and actions packed, definitely more than enough to keep one engaged and turning the pages deep into midnight. Also, it pairs the right level of complexity to keep you guessing and engaged in trying to figure out what’s happening next, whilst still be right for the age range. Additionally it, it has all a good balance of heavy and light moments, sprinkled with an instantly loveable humour to cool off the darkness of impending dooms and dangerous demons.

As for characters – well I’ve made some new friends, and I’d certainly like to give them a visit again in a years time when the return to grace the pages of Book 2. Chokshi has created a group of relatable, funny, smart and well-fleshed out characters, that no one can avoid falling in love with, even if they tried. Naturally, Aru is the golden glory of this books, and rightly so. So much of younger me I  saw in her and she’s is going to be so relatable for younger brown children; smart, kind of popular but not, kind of fits in but not really, and obsessed with these Indian talks of mythology and magic that none of her classmates really know about, which inevitably leads to the propensity for little lies and wealth’s of storytelling. Aru was me as a child and, as I’ve said, will be so many other brown kids, so not only was the a extremely pleasant character to read and follow, but she’s also going to be a confidant and companion for millions of younger kids, of all creed and colour, around the world.
As for other characters, can we just talk about Boo – because no hero is anything without their sidekick and Boo, was boo-tiful. Funny, witty, almost a guardian to guide Aru, he embodies that guiding voice that every child needs, but in a way that sounds friendly and in a way that they want it. He flies through the journey with you and Aru, teaching both the reader and Aru, allowing both to grow and evolve together. I’d say Boo propels this story just as much as Aru does.
So there’s definitely a group of really wonderful, relatable and fleshed out characters here.

And finally the writing. I don’t think anyone had any doubts about this – Chokshi is known for her whimsical and poetic writing, that feels like crushed Indian silk – and Aru Shah was no exception. Albeit, a level simpler due to the younger audience, it still retained what makes a Chokshi book inconicly Chokshi and thus beautiful. In turn, this made the world building and characters what they were – her mastery of world cemented the beauty in the world, the conviction in the mythology and the personability and development in the characters. Not a sentence went by when I didn’t want to tab and add to my mental list of beautiful prose to put in my mental museum of literary art. Ultimately the writing was stellar and made for a very whimsical and beautiful tale – perfect for what it was trying to do here.

So overall, as you may have gathered, I’m a little more than in love with Aru Shah and the End of Time, and I have no doubt that you will be too. It really is beautiful, rich, dreamy and magical. Aru Shah is like a woman of whimsy, poetry and magic wrapped in a saree of silk and gold. A must read.